Fit for a Khan

Over four decades of trading many old Bakhtiyari rugs and trappings have come and gone. Most often these were village production from the Chahar Mahal valley and many trappings from both Luri and Bakhtiyari nomadic tribal groups.

Two outstanding carpets, however, have stood out as testaments to the skill and artistic endeavours of Bahktiyari people. These weavings have also an important historical, social and political context. Both bear inscriptions to Bakhtiyari Khans who were powerful tribal and national leaders.

Some background to the Bakhtiyari people.

THE BAKHTIYARI and the GREAT KHANS

The Bakhtiyari are one of the two largest tribal groups in Iran. In the 1970s the population stood at about 600,000 of which about one third were nomads and the others settled villagers. They live west of Isfahan in central Iran and their traditional way of life, since at least the 13th century, has centred around seasonal migrations from high summer pastures eylagh to winter pastures gamsir.

In terms of social organization, the smallest social unit is the family tent khamweda, and then the encampment, mal, that may comprise from three to twelve tents and represents the extended family. When on the move, related camps group together to form tira that are again grouped into taifeha numbering by this stage around 25,000. The next unit of organization is the bab or buluk that are then aligned to either the Haft Lang or Char Lang the two major branches, basksh, of the Bakhtiyari.

The Bakhtiyari social organization is echoed in their centralised and hierarchical political system. Until the middle of the 20th century power was entirely in the hands of the supreme chief, the Ilkhan. This structure originally functioned to administer the population, justice, law and order, grazing rights etc.

After the Afghan invasions of the early 18th century and the decline of the Safavid empire in Persia, the Khans emerged as leaders using their power to exploit and control labour and land tenure. They were also intermediaries with the government of the day. In return for privilege and power, the Qajar rulers demanded absolute loyalty. By the middle of the 19th century, however, a powerful and effective Bakhtiyari leader, Husain Quli Khan, emerged to usher in the era of the Great Khans. In 1867 he was confirmed as Ilkhan, supreme Khan of all Bakhtiyari. He was eventually murdered in 1882 on the orders of the ruling Qajar Shah and the title of Ilkhan passed to Husain Quli’s brother.

Bakhtiyari wealth increased dramatically in the 1900s through land ownership and particularly oil revenue when the British discovered oil on their land. They had national and international political strength and precipitated the Iranian Constitutional Crisis of 1905 - 1911, invading Tehran and deposing the Qajar Shah, then installing Bakhtiyaris as prime minister and ministers within the new government.

After the first World War, the rise of Reza Khan (later Reza Shah) and his army spelled the end of any real Bakhtiyari power and a policy of tribal repression began.

The first Khan carpet is a prayer rug measuring 210 x 147 cm. It was made in 1898 for a prominent Bakhtiyari Khan, Ghulam Husain Shahab al-Saltaneh Sardar Muhtashem, later to become supreme chief, Ilkhan, of the Bakhtiyari, a minister in the Iranian government and governor of Kirman province.

“On the order of His Excellency, the most Exalted, the most Glorious, the most Generous, Master Ghulam Khan Shahab al-Saltaneh. Work of the Bakhtiari in the year 1316”

Ghulam Khan was also famous as he featured in the iconic silent documentary on the Baktiyari migrations, "Grass", made by Merian Cooper and Ernest Schoedsack with Marguerite Harrison in 1924.  Cooper and Schoedsack famously directed and produced in 1933 the original King Kong movie, considered one of the greatest 'horror' movies of all time.

Such 'Khan' carpets, whilst well known, are rare and all bear inscriptions to individually named khans from one particular group of tribes, the Dureki bab of the Haft Lang Bakhtiari. As Ian Bennett says in his study of these carpets (Hali Magazine Issues 43 & 44) they “represent an extremely interesting, perhaps unique, social and artistic record” and the inscriptions “add an historical depth and richness” to one of the most turbulent period's of Iran's history, the rise and fall of the Great Khans of the Bakhtiari. 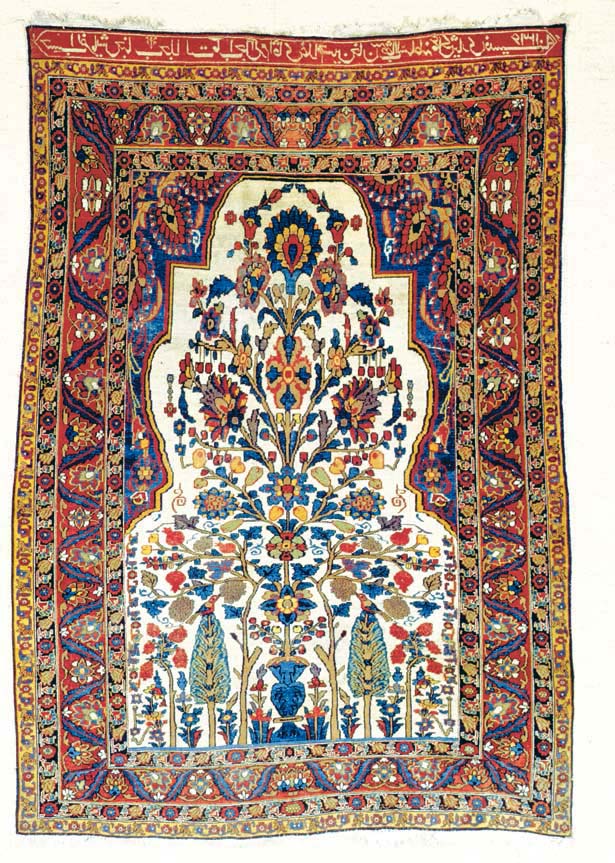 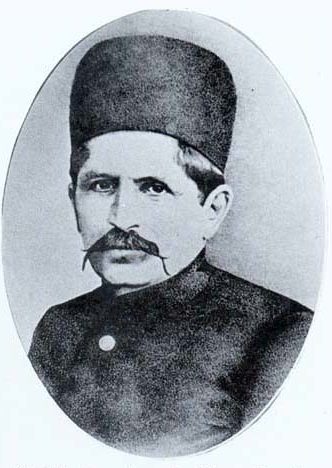 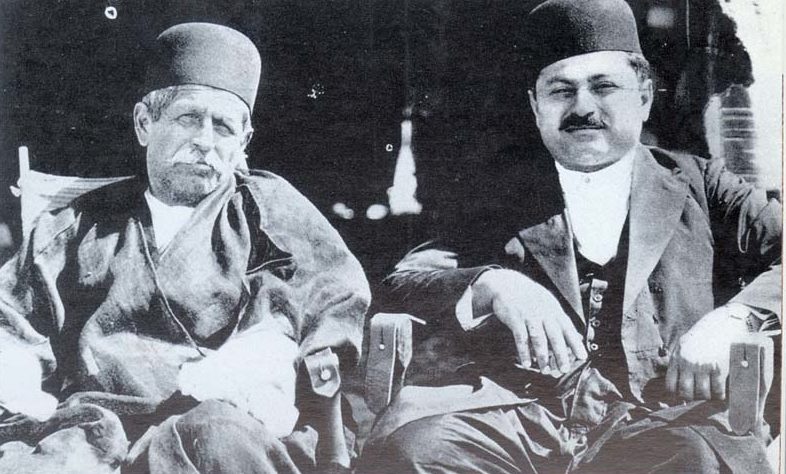 The second Khan carpet, measuring 400 x 235 cm, we know less about. It is inscribed to the order of Aghaye Sardar Achja Amal Khan and again probably in the late 19th century.

The ‘Khan’ carpets as a group are all of the late Qajar period from the late 19th and early 20th centuries and all but a few are dated in the inscription. The inscriptions usually start with “farmayesh” meaning “to the order of” followed by a series of honorifics and the name of the khan that would indicate these carpets were most probably made for their personal use. 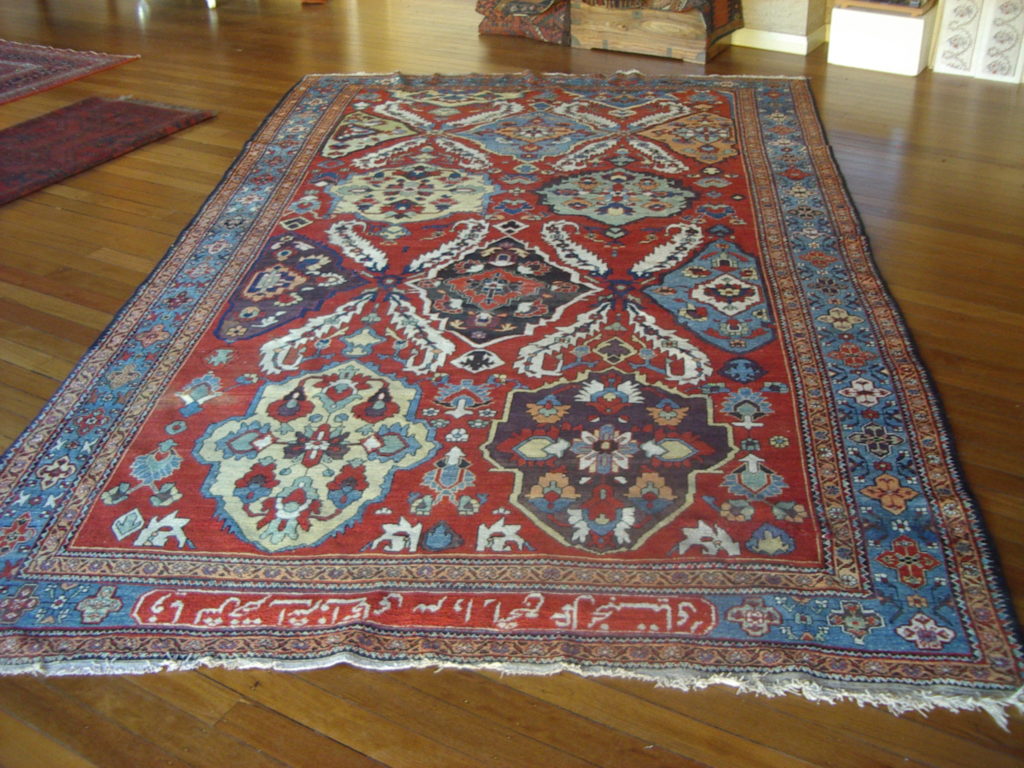 Bakhtiyari carpet with inscription. Details of carpet below. 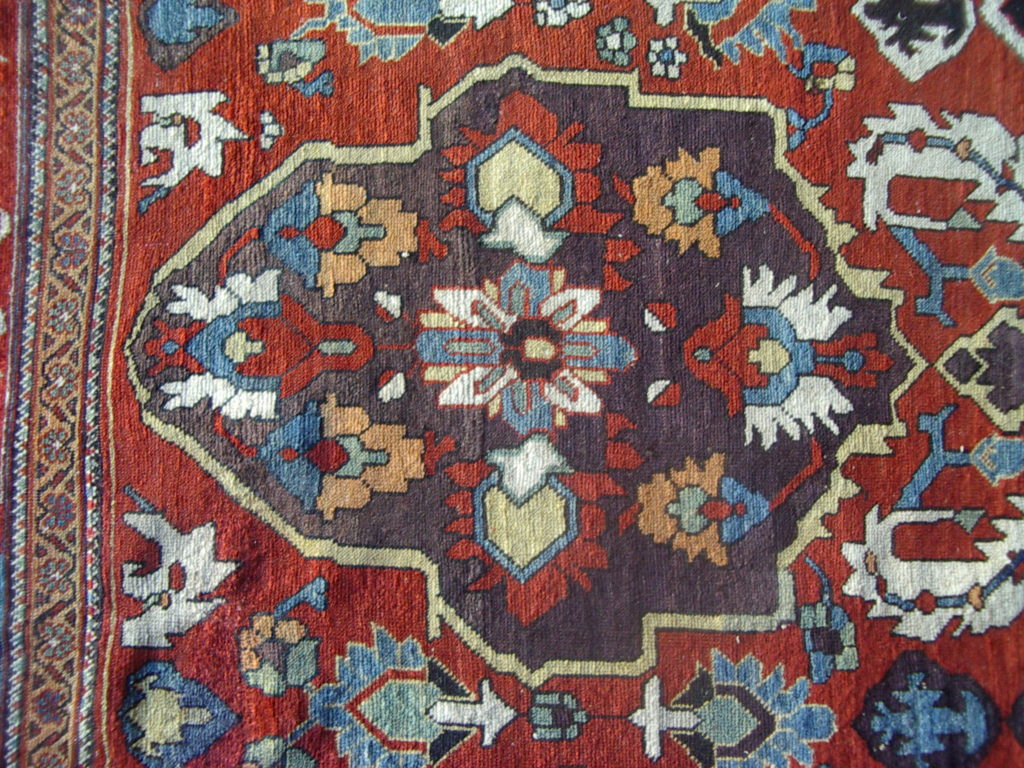 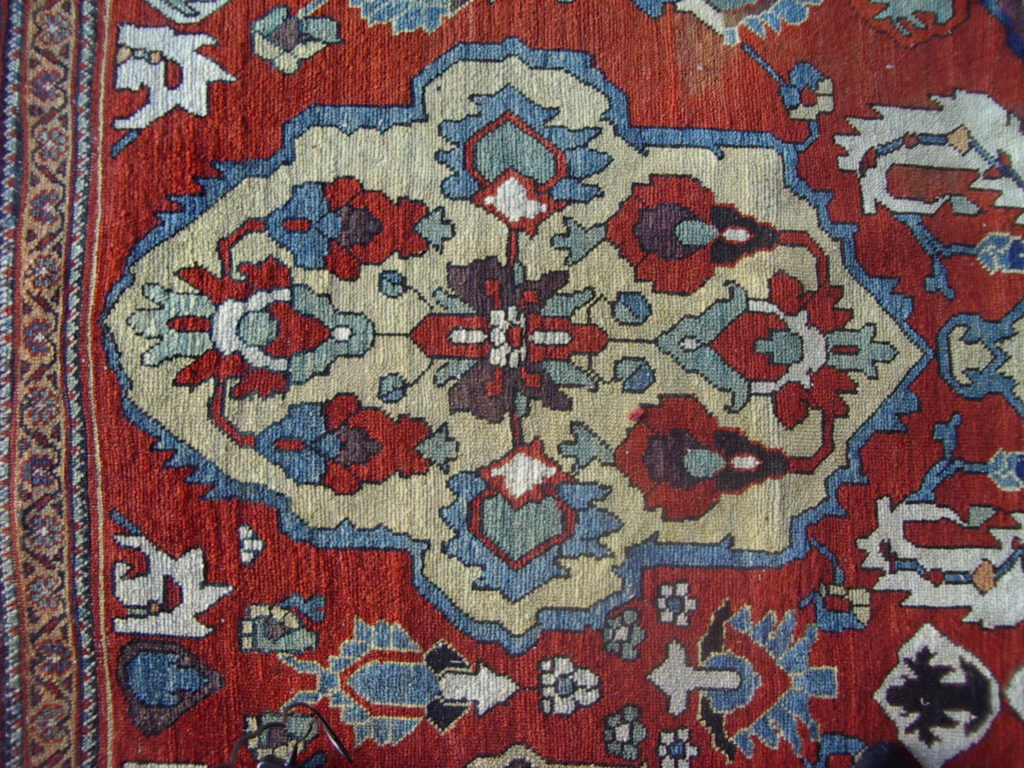