The Cantrol Collection of Printing Blocks

Almost coincidentally in the early 1980’s, an archive of textile history was discovered in Kent UK in a Victorian warehouse now demolished. This was the archival storage of the last remaining hand-block silk printer in London, David Evans and Co.

A set of two ‘paisley pattern’ printing blocks. The print or top block (left above) is the most elaborate using metalwork techniques and the other of carved wood, both with ‘pitch pins’ at each corner.

The 19th century textile printing blocks are made from well-seasoned wood, mainly sycamore and pear wood. Craftsmen of the highest skill were employed in the carving of blocks, which could take weeks to make. Each colour employed in the textile dyeing process of the shawl or handkerchief required a separate block. The top block, known as the print block, contained the main pattern and was usually the most elaborate using techniques of metalwork, such as brass picotage and pinwork as well as wood carving. In 1834 a Frenchman, M Perrot of Rouen, invented a simpler method than was previously used for the casting of pewter called the perrotine which facilitated better blocks. Different designs required different methods and the Swaislands, another Kentish textile manufacturer, perfected the used of brass bars to imitate hand woven shawls of paisley design. Felt insertions were often used instead of large areas of wood which would not take dye colour evenly. Most of these blocks still retain their sharp pointed corner pins known as ‘pitch pins’. These marked the corners of the design for each successive block and each new colour thereby ensuring accurate registration of the pattern and in the case of repeating patterns an accurate repeat.

A set of ‘paisley pattern’ printing blocks, one with metal pinwork and the other of carved wood.

David Evans and Co. was founded in 1843 when the man himself, David Evans, a Cheapside silk merchant moved into the manufacture of textiles and took over Augustus Applegarth’s production at the ‘Bandanna’ factory in Crayford, Kent. Applegarth (1788 –1871) was most famous for his invention of the curved stereotype press used in The Times newspaper prior to the introduction of modern printing presses. Bandanna is the Hindi word for a headscarf, a specialty of the factory, made in multi-coloured silk or cotton. Besides paisley bandannas, they also printed dress materials. A shawl printed by David Evans and Co. was awarded a medal in the Paris exhibition of 1855 and David Evans factory had a shawl stand at the Great Exhibition of 1851. They undertook commission work from outside the factory and accumulated patterns from various designers as well as inheriting designs and printing blocks from other firms in process of take overs. They also purchased printing blocks. 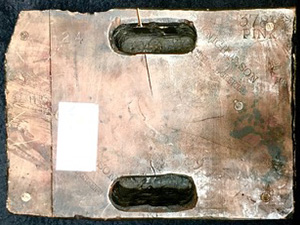 The top of a printing block with hand grips and identification marks and colour.

Every set of blocks was recorded by number, usually five figures, preceded by a letter. In particular F stood for Filler and B for Border. Originally the two terms only applied to handkerchiefs and shawls. To begin with they added to their stock of blocks by using their own block makers such as Larking of Hackney, Knight of Bethnall Green in the mid 19th century, and later Barrett. A very fine addition to the archives were the French blocks, in particular those by Maillaut of Paris which were bought from Lyons shawl makers when their trade collapsed at the time of the Franco-Prussian War (1870 – 1871). 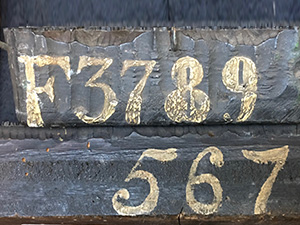 Each set of blocks was usually numbered with a letter preceding the number; F indicating a filler block.

At the end of the 19th century, David Evans & Co expanded from handkerchiefs and shawls to encompass other goods, cravats, scarves and manufactured flannels and silk chiffon. After the Second World War, screen printing gradually took over from block printing.